Home » Press centre » Countries of Latin America and the Caribbean Reaffirm the Escazú Agreement as a Fundamental Tool for Ensuring a Healthy Environment for Present and Future Generations
Available in: EnglishEspañol

The final day of the first meeting of the Conference of the Parties (COP 1) to the Agreement included a high-level event in celebration of the first anniversary of its entry into force and International Mother Earth Day.
22 April 2022 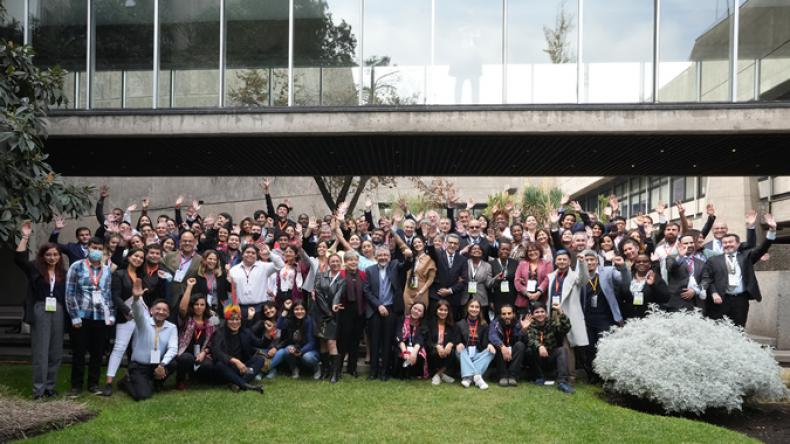 Family photo of the delegates attending the COP 1 of the Escazú Agreement.

The 12 States Party to the Regional Agreement on Access to Information, Public Participation and Justice in Environmental Matters in Latin America and the Caribbean – known as the Escazú Agreement – as well as observer countries who participated in the first meeting of the Conference of the Parties (COP 1), brought the meeting to a close at ECLAC's central headquarters in Santiago, Chile today with the approval of a Political Declaration in which they reaffirmed the treaty as a driving force for sustainable development and a crucial governance tool for the development of better public policies in the region, with a view to ensuring a healthy environment for present and future generations.

In total, more than 780 delegates from countries, international and regional organizations, panelists and civil society representatives participated, either in person or virtually, over the three days of the meeting (from April 20-22). More than 290 people also followed each day of the live broadcast over different channels (website, YouTube and Zoom), and 120 journalists and members of the press were given credentials to cover the different sessions.

The final day of the COP 1 of the Escazú Agreement included a high-level segment in celebration of the first anniversary of the treaty's entry into force and International Mother Earth Day, both celebrated on April 22, moderated by Mario Cimoli, Acting Executive Secretary of the Economic Commission for Latin America and the Caribbean (ECLAC), featuring participation by authorities and distinguished guests like Luis Vayas, Deputy Minister of Foreign Affairs for Ecuador; Alicia Bárcena, former Executive Secretary of ECLAC; Patricia Madrigal, former Deputy Minister of Environment of Costa Rica; Katta Alonso, Spokesperson, Women in Sacrifice Zones, Chile; Laura Serna, Escazú Youth Champion, Colombia; Nadino Calapucha, representing the Coordinator of Indigenous Organizations of the Amazon Basin (COICA); María-Noel Vaeza, Regional Director for the Americas and the Caribbean for the United Nations Entity for Gender Equality and the Empowerment of Women (UN-Women); Michelle Bachelet Jeria, United Nations High Commissioner for Human Rights (via virtual); and Inger Andersen, Executive Director of the United Nations Environment Programme, UNEP (via video).

In his opening remarks, Mario Cimoli underscored that commemorating International Mother Earth Day in the context of COP 1 of Escazú is a particular moment, a unique time to debate, look back at history and see how we can improve. "We need answers to know how to move and what actions to take looking towards the future at this very difficult juncture the world is living right now," he said.

Meanwhile, Ecuador's Deputy Foreign Minister Luis Vayas stated that we are at a crossroads in humanity with regard to environmental protection. "International environmental governance must focus on generating timely, coherent and participatory solutions that allow us to decidedly confront the environmental crises that ail us, without leaving anyone behind," he said.

In her remarks, former ECLAC Executive Secretary Alicia Bárcena emphasized that this is a truly extraordinary moment. "I congratulate the countries that have ratified the Escazú Agreement and propose that COP 1 of Escazú be dedicated to indigenous peoples, the silent guardians of the Earth and its biodiversity," she said. "The Escazú Agreement is exemplary because it is a palpable example of the commitment of Latin America and the Caribbean to multilateralism, but a different kind of multilateralism where agreements are forged jointly between governments and society," she added.

During the event, Bárcena received broad recognition from all participants for her firm support for this initiative, without which it would not have materialized. She was informally appointed "lifelong ambassador" of the Escazú Agreement.

Patricia Madrigal, former Deputy Minister of Environment of Costa Rica – one of the main figures driving the Agreement in its early stages – indicated that this treaty (Escazú) has been a meeting point, an example of multilateralism. "We have realized that more than a binding legal instrument, more than our initial struggles in its framing and negotiation, more than any of this, it has become a movement throughout the region of Latin America and the Caribbean that grows more every day," she emphasized.

Katta Alonso, Spokesperson for the Women of Sacrifice Zones in Chile, stated that a just society is not only about respect for human rights, but also for nature. "We owe everything to the Earth, without her there is no life. For this reason we must protect her, because at the end of the day we are part of her and we cannot go on exploiting her has we have done until now," she said. She added that despite the grave environmental situation being experienced in the Puchuncaví zone (in Chile's Valparaíso region), they are hopeful that the signing of the Escazú Agreement with the current government and approval of the new Constitution will lead to the recovery of the "sacrifice zones" all over Chile.

Laura Serna, Escazú Youth Champion for Colombia, pointed out that no treaty can generate change on its own. They require flesh and blood actors to make that happen. "With the Escazú Agreement, we hope a new social fabric emerges in which we can heal old wounds and forge a new generation," she said.

Nadino Calapucha, of the Coordinating Committee of Indigenous Organizations of the Amazon Basin (COICA), asked for a moment of silence for all the human rights defenders who have been killed for protecting the environment. "There is nothing to celebrate after five years of having declared International Mother Earth Day… Humanity and the planet have reached a point of no return. Many speak of the climate crisis and the economic crisis, but we must be realistic that there is also a social crisis, a crisis of humanity, a crisis of civilization. And today we must commit to changing that story," he highlighted.

María-Noel Vaeza, Regional Director for the Americas and the Caribbean, UN-Women, stated that, regrettably 119 women defenders of human and environmental rights have been murdered in Latin America and the Caribbean so far in the pandemic. "It is urgent that we protect the link between women in all their diversity and the environment and its protection," she emphasized.

United Nations High Commissioner for Human Rights and former President of Chile, Michelle Bachelet, congratulated all the States Parties who have ratified this pioneering agreement (the Escazú Agreement) for showing leadership at the regional and global levels in the search for new tools to protect the environment and its defenders, calling on the States who have not yet ratified it to do so promptly. "In the face of environmental damage and injustices, legal instruments like the Escazú Agreement are one of the most effective tools for States to comply with their responsibility to safeguard the planet and the rights of its people," she said.

"The Escazú Agreement is unquestionably a milestone, because its protagonists are rights defenders. We could sum up the spirit of Escazú by saying that if we want to defend the environment, we must start by protecting those who defend it. However, according to data from our office, three out of four murders of defenders of the Earth and the environment currently occur in Latin America and the Caribbean," warned the United Nations high official.

In her message sent by video to the meeting, UNEP Executive Director Inger Anderson indicated that today is a historic moment for Latin America and the Caribbean. "COP 1 of Escazú marks a radical change in approach to the triple planetary crisis of climate change, loss of biodiversity, and pollution and waste," she said.

Following the high-level segment, Mario Cimoli and Jan Jarab, OHCHR Regional Representative for South America – and with virtual presence of Michelle Bachelet – signed an agreement of collaboration between ECLAC and the Office of the United Nations High Commissioner for Human Rights (OHCHR), whereby both institutions committed to promoting a rights-based approach to the effective implementation of the Escazú Agreement, basing their cooperation on the four pillars of the Agreement: access to information, participation, justice and the protection of  human rights defenders in environmental matters.

In the Political Declaration approved at the end of the conference, attending delegates also reaffirmed the importance of cooperation and multilateralism for moving forward as a region with efforts to achieve sustainable development and environmental protection and deepening those efforts. They likewise underscored that strategies for economic and social recovery from the repercussions of the coronavirus disease (COVID-19) pandemic and for overcoming the environmental crisis must have sustainability at their core, and must be guided by the pursuit of more inclusive development, accelerated implementation of environmental protection measures and greater climate action.

Finally, they called on all signatory countries to the Escazú Agreement who have not yet ratified it to do so at the earliest opportunity, and for those who are not signatories or Parties to adhere as soon as possible.

The delegates also approved a series of decisions on diverse themes related to the functioning of the COP, including the rules of procedure and the rules relating to the structure and functions of the Committee to Support Implementation and Compliance, agreeing to hold an extraordinary meeting in April 2023 in Argentina. The second ordinary meeting of the COP of the Escazú Agreement is expected to take place in April 2024.

The closing ceremony of COP 1 of the Escazú Agreement was led by Ambassador Marcelo Cousillas, Director of Legal Advising for Uruguay's Ministry of Environment, in his capacity as Chairperson of the meeting; Natalia Gómez and Tomás Severino, representatives of the public; Adrián Peña, Minister of Environment for Uruguay (via online); and Joseluis Samaniego, Director of ECLAC's Division for Sustainable Development and Human Settlements. 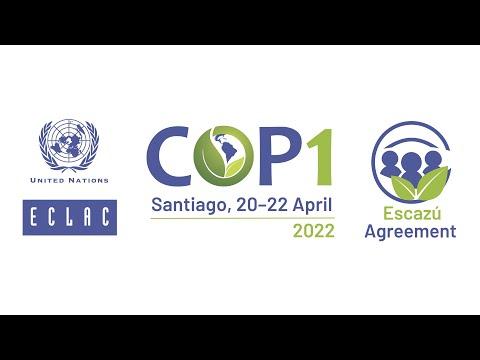