On the day of celebrations organized by ECLAC, the region’s countries reaffirmed the importance of the first regional environmental treaty and their commitment to protecting the planet and the people who defend it.
22 April 2021 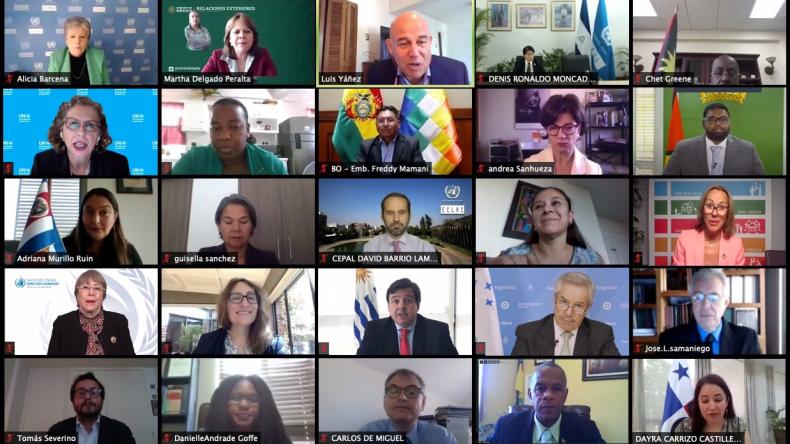 The States Parties to the Regional Agreement on Access to Information, Public Participation and Justice in Environmental Matters in Latin America and the Caribbean – known as the Escazú Agreement  – celebrated the treaty’s entry into force this Thursday, April 22, on precisely the same date on which International Mother Earth Day is commemorated.

Having reached the required number of ratifications on January 22, 2021, in accordance with the conditions stipulated under Article 22, all of the Escazú Agreement’s provisions go into effect as of today. To date, 24 countries in the region have signed the accord and 12 have already ratified it, becoming States Parties to the treaty.

On the virtual day of celebrations organized by the Economic Commission for Latin America and the Caribbean (ECLAC) – the United Nations regional commission in charge of the Agreement’s Secretariat – authorities from the governments that have signed and ratified this legal instrument along with representatives of international organizations, the public and civil society, reaffirmed the importance of this agreement, adopted on March 4, 2018 in the Costa Rican district that bears its name after six years of work and an open, transparent and inclusive negotiation process. They also renewed their commitment to protecting the planet and the people who defend it.

In her welcome remarks, Alicia Bárcena emphasized that the Escazú Agreement pays homage to Mother Earth and with it, the region demonstrates its commitment to protecting the planet and those who, by defending it, care for our lives and our future.

“The Escazú Agreement compels us to reflect on the close link between human rights and the construction of a more sustainable, inclusive and integrating development. It offers us a path of dialogue for advancing on implementation of the 2030 Agenda for Sustainable Development at this very complex time that the region, and world, are living through. Ultimately, it guides our responses to be able to build better,” ECLAC’s highest authority declared.

Bárcena indicated that in order to address the planet’s current challenges and build a new future and a transformative recovery with equality and sustainability, it is essential to strengthen the rule of law, bolster more participatory democracy, safeguard human rights and maintain peace, preventing social conflicts while our productive structure undergoes transformation.

“It is necessary to recover politics as an instrument of change to generate public goods and lasting compacts. Compacts that invite the broadest and most diverse participation by social actors and that lay the foundation for building a welfare state. We must tread together the path to sustainable development,” she stressed.

“The Escazú Agreement’s emphasis on the creation and strengthening of capacities and on cooperation contributes to tackling shared challenges and reinforces regional environmental governance. Latin America and the Caribbean, therefore, is writing a new chapter in terms of strengthening environmental democracy and sustainable development,” Alicia Bárcena added.

In her remarks, Costa Rican Vice President Epsy Campbell indicated that the Agreement contains the minimum tools needed to ensure that natural resources are used properly, to demand from authorities fair access to information on environmental matters that can directly affect the lives of citizens, and to propose nature-based solutions to care for the health of ecosystems.

“Today, April 22nd, is a glorious date for the inhabitants of our Latin America and the Caribbean, as well as for the entire planet. What a better gift to Mother Earth, on her day, than to offer our reiterated commitment to human rights that tend to protect her, honor her and respect her,” Campbell stated.

In a message sent to the meeting and read by Alicia Bárcena, the UN Secretary-General, António Guterres, celebrated the fact that the Escazú Agreement is going into effect on International Mother Earth Day. He indicated that it is a historic achievement for the region, since it is not only the first environmental treaty of Latin America and the Caribbean but it is also the first to include provisions for the promotion and protection of human rights defenders in environmental matters. “As we continue to tackle the shattering impacts of COVID-19 and step up efforts to curb the triple crisis of climate change, biodiversity collapse and pollution of the natural environment, the Escazú Agreement’s entry into force provides hope and inspiration, and sets the stage for sustainable and resilient recovery,” he declared.

Meanwhile, in remarks made by video, the President of Guyana, Mohamed Irfaan Ali, stated that both Latin America and the Caribbean should feel a sense of collective pride due to their continued environmental leadership, as reflected in the adoption of this agreement.

The United Nations High Commissioner for Human Rights, Michelle Bachelet, sent a recorded message to the meeting in which she congratulated the countries that have ratified the agreement and encouraged the remaining Latin American and Caribbean nations to do so soon.

“In the face of environmental harm and injustice, legal instruments like the Escazú Agreement are one of the most effective tools for holding States accountable, defending rights, and protecting the health of people and of the planet. It provides a critical voice for environmental democracy and is aligned with the 2030 Agenda for Sustainable Development’s commitment to leave no one behind. I celebrate the significant public participation in the Agreement, with the important support of ECLAC,” she stated.

At the end of the high-level segment, Carlos Vives – a prominent artist, composer and founder of Iniciativa Tras la Perla – presented a music video and sent a message in which he highlighted the connection between music and nature and its protection.

“Through music I have been able to understand something fundamental: biodiversity is the basis of culture. The tradition to which my way of singing belongs has its roots in the indigenous rural man, in his mestizaje, he who knew how to celebrate nature joyfully and inhabit it. When we lose the diversity of life in nature, we also lose the music that is based on it…I celebrate this Agreement, a step forward in strengthening the instruments that we can have as a society for the task of caring for nature, because nature is us. We cannot poison the sources of life. This Agreement is a decisive step in that direction,” he said.

The day of celebrations on the entry into force of the Escazú Agreement continued with three panels that addressed the history of the treaty, in which participants recounted the journey involving six years of meetings and negotiations; the role of young people in the Agreement; and environmental defenders and the Escazú Agreement.