During a side-event to the 2019 United Nations High-Level Political Forum, experts reaffirm the importance of the Escazú Agreement for Latin America and the Caribbean.
15 July 2019 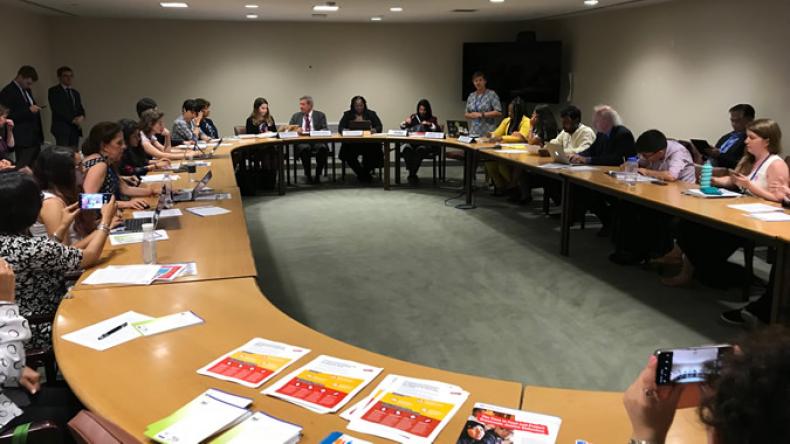 Meeting on the Escazú Agreement, held in New York this Monday 15 July, 2019.

The global commitment to sustainable development is the driving force behind the 2030 Agenda. In this setting, rights of access to information, public participation and justice in environmental matters are the cornerstone of democratic societies and play a crucial role in combating inequality and achieving sustainable development, said government authorities, experts from international organizations and civil society today during a side-event to the 2019 High-Level Political Forum on Sustainable Development being held at United Nations Headquarters in New York.

The meeting entitled “Establishing environmental rights for the most vulnerable” was co-organized by the Economic Commission for Latin America and the Caribbean (ECLAC), the World Resource Institute (WRI), the Government of Costa Rica, the Access Initiative, Namati, CIVICUS-Global Alliance for Citizen Participation and DAR-Perú. The meeting addressed the importance of the Escazú Agreement, approved in March 2018 with the participation of 24 countries from the region and currently in the process of signing and ratification, as an unprecedented legal instrument to ensure precisely those rights of access in environmental matters.

The event was moderated by Diane Quarless, Director of ECLAC’s Subregional Headquarters for the Caribbean, on behalf of Alicia Bárcena, Executive Secretary of the organization. Participants also included Ambassador Rodrigo Carazo, Permanent Representative for Costa Rico to the United Nations; Verónika Bustamante, Counselor for the Permanent Delegation of Perú to the United Nations; Yineth Balanta, president of the community council of the village of Yolombó, Suárez, Colombia; and Gabriela Burdiles, attorney and project director for the FIMA NGO.

During her remarks, Diane Quarless underscored that over the past decade, ECLAC has positioned equality at the core of development as a non-negotiable ethical principle from a rights-based perspective. “The reduction of inequality is not just an ethical imperative, it is also a requirement for the effectiveness and efficiency needed to achieve sustainable development and ensure that no one is left behind. Inequality is a barrier to development,” she said.

She explained that today it is more evident than ever that environmental degradation – the effects of which are accentuated by climate change – is having the most severe impact on the most disadvantaged groups, especially the poorest and most excluded.

In this arena, Quarless emphasized the importance of the Escazú Agreement, which to date has been signed by 17 countries and ratified by Guyana on April 18, 2019 (the first country to do so). On behalf of Alicia Bárcena, she especially congratulated Saint Vincent and the Grenadines for its recent signing of the document last Friday, July 12. “With that, it has reaffirmed its leadership and commitment to sustainable development,” she stated.

“The Escazú Agreement focuses on persons and groups in vulnerable situations, and seeks to leave no one behind. It is thus is a cornerstone in the implementation of the 2030 Agenda for Sustainable Development,” emphasized the ECLAC representative.

Meanwhile, Ambassador Rodrigo Carazo signaled that the provisions contained in the agreement and the centrality of rights of access in the 2030 Agenda for Sustainable Development could not be more relevant in the context of the current High-Level Political Forum’s, which is to empower people and ensure inclusion and equality.

“Indeed, not only it is the first environmental treaty in the world to include a definition of persons or groups in a situation of vulnerability or the first to include guarantees for environmental human rights defenders, but its many provisions regarding environmental information, public participation in environmental matters and access to justice are crucial for developing effective, accountable and transparent institutions at all levels; ensuring responsive, inclusive, participatory and representative decision-making, and promoting and enforcing non-discriminatory laws and policies for sustainable development,” stated the Ambassador.

Yineth Balanta, in her remarks, called on States to protect environmental defenders, for which it is vital that they commit to the Escazú Agreement. “I for now feel that I must continue to defend the community, the process and the rest of my family, who continue to struggle every day, to someday transform the situation of inequity and inequality, racism, the patriarchy and above all, the death policy in this country, into a policy that safeguards life, respects the environment, the big house,” she said.

Verónika Bustamante said that the Escazú Agreement represents an opportunity for Perú, in that it provides for the consolidation and strengthening of the practices contained in the national framework on access to information, public participation and mechanisms of environmental justice. It also promotes cooperation among States and capacity-building in order to attain a common standard for the implementation of rights of access, she added.

“Perú is committed to the implementation of the Sustainable Development Goals (SDGs). In this sense, the Escazú Agreement is a great contribution to the 2030 Agenda, in particular to SDG 16, which promotes peaceful and inclusive societies for sustainable development, facilitating access to justice for all and creating effective, responsible and inclusive institutions at all levels. It should also be noted that this Agreement contributes to the front fight against corruption,” she said.

Gabriela Burdiles, on her part, spoke about the barriers faced by vulnerable groups when it comes to accessing justice in environmental affairs and how the Escazú Agreement set standards in this arena. “Access to justice has to do with States’ obligations to remove all barriers that prevent people from exercising their rights, in order to reach timely and fair solutions. Environmental emergencies require immediate solutions because, otherwise, the damage may worsen and bring irreversible consequences to people and nature itself,” she underlined.

Recorded transmission of the event