In Key Week for Sustainable Development at the UN, Latin American and Caribbean Authorities Sign and Ratify the Escazú Agreement

A year after being opened for signature, the first regional treaty on environmental matters was signed today by two countries and ratified by five nations at the global organization’s headquarters in New York.
26 September 2019 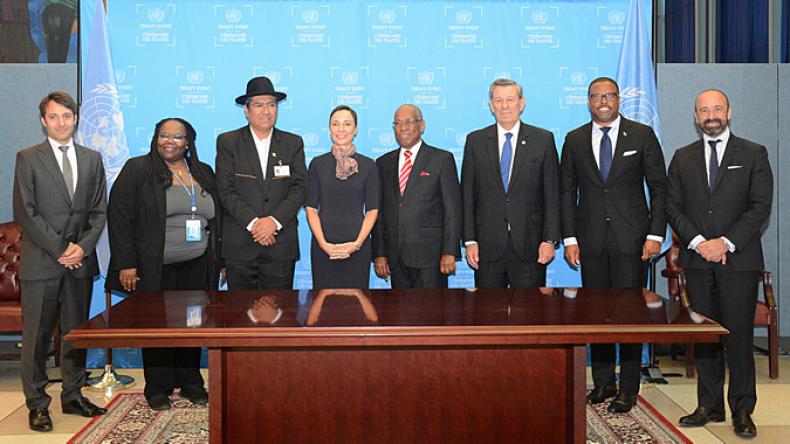 Family photo of the countries' authorities that signed or ratified the Escazú Agreement on Thursday 26 September 2019, at UN headquarters in New York.

A year after being opened for signature, the Regional Agreement on Access to Information, Public Participation and Justice in Environmental Matters in Latin America and the Caribbean – known as the Escazú Agreement – was signed by two countries and ratified by another five at United Nations headquarters in New York, during a high-level ceremony held in the framework of the general debate of the organization’s 74th General Assembly.

This historic legal instrument – which is Latin America and the Caribbean’s first environmental treaty and the only one of its kind in the world that has emerged from the United Nations Conference on Sustainable Development (Río+20) thus far – was opened for the signature of all States on September 27, 2018. To date, it has garnered 19 signatory countries, and six nations have ratified it out of the 11 States Parties needed for its entry into force.

The Escazú Agreement seeks to ensure that all people have access to timely and reliable information, can participate effectively in the decisions affecting their lives and their surroundings, and are able to access justice with regard to environmental matters, thereby contributing to the fulfillment of the 2030 Agenda and its Sustainable Development Goals (SDGs).

The signature ceremony was presided over by the United Nations Under-Secretary-General for Legal Affairs and UN Legal Counsel, Miguel de Serpa Soares, and drew the participation of foreign ministers and other authorities from Bolivia, Jamaica, Saint Kitts and Nevis, Saint Vincent and the Grenadines, and Uruguay. ECLAC’s Executive Secretary, Alicia Bárcena, was represented by the Director of the organization’s Subregional Headquarters for the Caribbean, Diane Quarless.

The ceremony took place during a key week for multilateralism and sustainable development at the United Nations headquarters in New York, since on previous days the Climate Action Summit was held (September 23) along with the SDG Summit (September 24-25). Meanwhile, tomorrow, Friday, September 27, a meeting on the review of the SAMOA Pathway will take place.

The Escazú Agreement was one of the four environmental treaties highlighted by the United Nations Secretary-General, António Guterres, at the Treaty Event 2019, a ceremony held each year to promote States’ participation in the multilateral treaties in which the Secretary-General is the depositary, the motto of which is “in support of the 2030 Agenda”. The other environmental treaties highlighted were the Paris Agreement, the Convention to Combat Desertification in those Countries Experiencing Serious Drought and/or Desertification, Particularly in Africa (UNCCD), and the Convention on the Law of the Non-Navigational Uses of International Watercourses.

The new signatory and ratifying States will join the others at the first meeting of the signatory countries of the Escazú Agreement, which will be held on October 11-12, 2019 in San José, Costa Rica.

Observatory on Principle 10 in Latin America and the Caribbean: https://observatoriop10.cepal.org/en.