Representatives of the 21 nations that have signed it to date are gathered in Costa Rica at the first meeting of the signatories of the treaty, which seeks to guarantee rights of access in environmental matters.
11 October 2019 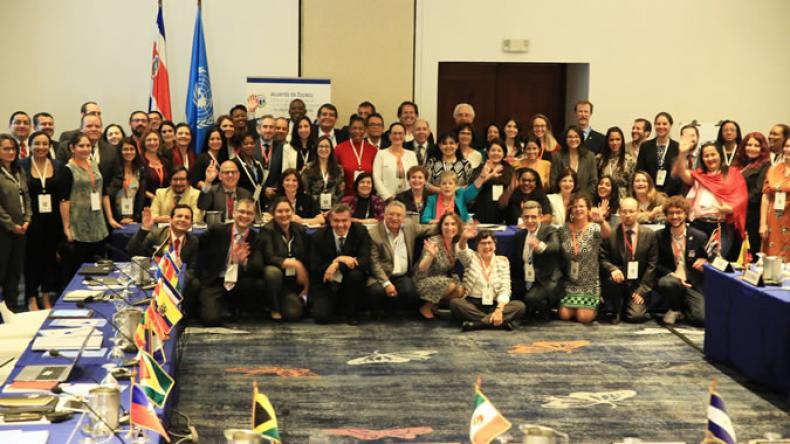 Family photo of the representatives attending the First Meeting of the Signatory Countries of the Escazú Agreement.

The States that have signed or ratified the Regional Agreement on Access to Information, Public Participation and Justice in Environmental Matters in Latin America and the Caribbean – known as the Escazú Agreement – began the first meeting of the signatories of this treaty this Friday, October 11, with a call to increase efforts to attain its prompt entry into force.

This gathering – which is taking place through tomorrow, Saturday, October 12, in San José, Costa Rica – is being attended by representatives of the 21 Latin American and Caribbean nations that have signed the treaty thus far, as well as other observer nations, who will analyze the topics to be addressed at the first meeting of the Conference of the Parties, as well as strategies and partnerships for achieving the legal instrument’s early entry into force and implementation.

The Agreement will enter into force once it obtains 11 ratifications. Half of these have already been achieved so far, and several countries are in the process of ratifying it.

The meeting was inaugurated by Lorena Aguilar, Costa Rica’s Vice Minister of Foreign Affairs and Worship; Alicia Bárcena, Executive Secretary of the Economic Commission for Latin America and the Caribbean (ECLAC); and Irene Murillo and Danielle Andrade, representatives of the public.

In her welcome remarks, Vice Minister Lorena Aguilar indicated that today’s meeting on the Escazú Agreement is the last of this week’s events related to the preparatory meeting for the 25th Conference of the Parties to the Framework Convention on Climate Change (PRE COP 25), held in Costa Rica, and it is centered on human rights. “These are essential principles for Costa Rica,” she stated, adding that this meeting “is like the first PRE COP for the Escazú Agreement.”

“The Escazú Agreement is a pioneering and visionary accord. It is one of the main environmental treaties in the world in the last 20 years. It is based on the premise of ensuring the protection of the environment and human rights, in a sustainable development model,” the Costa Rican authority added.

Meanwhile, in her remarks, Alicia Bárcena emphasized that the Escazú Agreement is an unprecedented legal instrument in our region. It constitutes Latin America and the Caribbean’s first regional environmental treaty, and it is the only one to have emerged out of the United Nations Conference on Sustainable Development (Rio+20). In addition, it is the first in the world to establish specific provisions for the promotion, protection and defense of human rights defenders in environmental matters, she explained.

“With the ultimate goal of guaranteeing for present and future generations the right to a healthy environment through access to information, public participation and justice, the strengthening of capacities and cooperation, and by focusing on leaving no one behind, the Escazú Agreement is a tangible demonstration of our region’s commitment to a development model that is more egalitarian, more just and more sustainable,” she stated.

“With their signature and ratification, the region’s countries are politically and legally expressing their irrefutable commitment to rights of access, human rights and environmental protection, but above all to their citizens,” the senior United Nations official said.

ECLAC’s Executive Secretary also publicly recognized Caribbean countries, noting: “We have said ‘The Caribbean first,’ since they have the populations that are most vulnerable to climate change, above all in coastal areas. They have a vital right of access to information, participation and environmental justice.”

The representatives of the public, Irene Murillo and Danielle Andrade, stressed that it is of critical importance that all the countries of Latin America and the Caribbean sign and ratify the Escazú Agreement, since it is the necessary guarantee for this region to be able to move forward in the context of the climate crisis. They also expressed their gratitude for all the progress that has been made in the region as part of this process and congratulated the countries that have signed and ratified the agreement.

At this first meeting of the signatories, participants will examine the topics to be focused on during the first meeting of the Conference of the Parties of the Escazú Agreement, such as the rules of procedure of the Conference of the Parties, including the modalities for significant participation by the public; the financial provisions that are necessary for the functioning and implementation of the Agreement; and rules relating to the structure and functions of the Committee to Support Implementation and Compliance.

Furthermore, they will discuss strategies and alternatives for achieving the Escazú Agreement’s early entry into force and implementation, as well as partnerships and synergies.

Members of the media are invited to attend the First Meeting of the Signatory Countries of the Escazú Agreement, which is taking place in San José, Costa Rica (Hotel Double Tree by Hilton, Cocorí hall). Journalists must have their media credentials or identity documents with them to gain access.

More information, including the event program, is available at this link.