A high-level event on the occasion of International Human Rights Day, held in the framework of the Second Meeting of the Signatory Countries to the Agreement, brought together Epsy Campbell (Costa Rica), Michelle Bachelet (OHCHR), Alicia Bárcena (ECLAC), Mary Robinson (The Elders) and Martha Delgado (Mexico), among other prominent figures.
10 December 2020 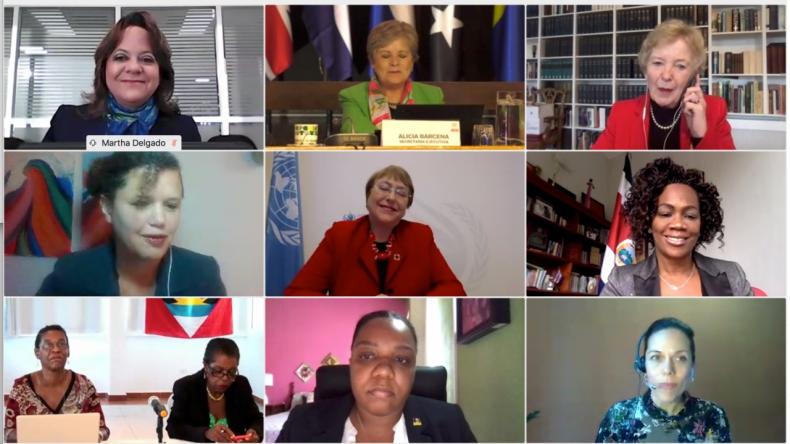 Family photo of the high-level event on the occasion of International Human Rights Day, held in the framework of the Second Meeting of the Signatory Countries to the Escazú Agreement.

Authorities from Costa Rica and Mexico, along with senior representatives of United Nations organizations and other prominent figures, highlighted today the importance of the Regional Agreement on Access to Information, Public Participation and Justice in Environmental Matters in Latin America and the Caribbean – known as the Escazú Agreement – for defending and protecting human rights, at a high-level event held in the framework of the Second Meeting of the Signatory Countries to the Escazú Agreement, which has been taking place virtually on December 9-10 under the auspices of the Government of Antigua and Barbuda.

This high-level event on the occasion of International Human Rights Day – entitled “The virtuous circle between the environment, human rights and the Escazú Agreement” – was moderated by Carole Excell, of The Access Initiative (TAI), and featured a live panel made up exclusively of prominent women in the regional and international political and social arena: Epsy Campbell, Vice President of the Republic of Costa Rica; Michelle Bachelet, the United Nations High Commissioner for Human Rights (OHCHR); Mary Robinson, the first woman President of Ireland, former UN High Commissioner for Human Rights, and Chair of The Elders; Martha Delgado, Vice-Minister for Multilateral Affairs and Human Rights at the Ministry of Foreign Affairs of Mexico; Nicky Black, Director of the Social and Economic Development Programme of the International Council on Mining and Metals (ICMM); Nafesha Richardson, Youth Champion of Escazú from Saint Vincent and the Grenadines; and Alicia Bárcena, Executive Secretary of the Economic Commission for Latin America and the Caribbean (ECLAC).

The Vice President of Costa Rica, Epsy Campbell, indicated that the Escazú Agreement is an example for the entire world since it shows that Latin America and the Caribbean has given exceptional importance to defending the human rights of environmental activists, since it puts us in a position to guarantee a legal framework for their protection.

“In Latin America, we have suffered tremendous attacks on environmental defenders, including indigenous people, rural leaders, activists from environmental organizations, leaders of Afro-descendent organizations, which in some cases have ended in death. Having a legal tool that protects them indicates that our region is not only committed to the environment but also protects environmental activists’ lives and rights. This is a fundamental step forward,” she stated.

Meanwhile, the United Nations High Commissioner for Human Rights, Michelle Bachelet, emphasized that the Escazú Agreement is the first of its kind in the world, since it not only protects human rights but also guarantees that all people have the right to a healthy environment, to participate, and to access information and justice in environmental matters.

The high-ranking UN official noted that the region is one of the most dangerous on earth for environmental defenders. She explained that in 2019, 212 homicides of human rights defenders were recorded, with 2/3 of these cases occurring in Latin America and the Caribbean.

“The Escazú Agreement comes at a very opportune time because we can make a real commitment to change. It provides a cornerstone for environmental democracy, international cooperation and multilateralism and that must be at the center of efforts to build back better using a human rights-based approach,” Bachelet sustained.

Meanwhile, the Chair of The Elders, Mary Robinson, expressed her satisfaction with the Agreement and her concern over the loosening of environmental protection measures effected by many countries due to the outbreak of the COVID-19 pandemic.

“I’m excited by the Escazú Agreement from the beginning because it is very relevant for Latin America and the Caribbean, given that this is the region where more environmental defenders are killed. The agreement can help us move towards a sustainable recovery,” Robinson indicated.

The Vice-Minister for Multilateral Affairs and Human Rights at the Ministry of Foreign Affairs of Mexico, Martha Delgado, stressed the importance of recognizing that there is a huge challenge in Latin America and the Caribbean for achieving environmental justice, access to information and civic participation in public policies on environmental matters. She also announced that yesterday (December 9) Mexico published in its Official Gazette the Escazú Agreement’s ratification, which it will deposit (at United Nations headquarters) as soon as possible, along with all the other countries that want to be a part of this initiative, so that it can enter into force in our region.

“This agreement is a suitable vehicle for establishing important instruments, strengthening democracy, citizen participation and environmental justice, and in an intersectional way in all communities. Civil society participation is very important. The Escazú Agreement has become a reference point for cooperation. The challenge now will be its implementation,” Delgado stressed.

Meanwhile, the Director of the Social and Economic Development Programme of the International Council on Mining and Metals (ICMM), Nicky Black, said in her remarks that responsible companies recognize that critical voices and human rights defenders help to create long-term values.

“Demonstrating accountability and transparency is critical for ensuring successful and meaningful interactions with local communities. In this area, effective grievance mechanisms play a key role: they help defuse potential problems, they build and maintain trust with local communities, and they offer solutions when issues arise,” Black explained.

The Youth Champion of Escazú from Saint Vincent and the Grenadines, Nafesha Richardson, stressed the importance of young people’s participation in both the ratification of the Escazú Agreement as well as its future implementation.

“Access to information is the biggest problem we have in Latin America and the Caribbean. It’s very important for people to be able to access reliable information. We must work so that the Agreement is not only ratified but also applied,” she stated.

In her remarks, ECLAC’s Executive Secretary, Alicia Bárcena, pointed up the fact that this will be the last meeting of the signatory countries to the Escazú Agreement since numerous countries have already ratified it, and it should therefore enter into force soon, “which means that we are on the brink of convening the first Conference of the Parties to the treaty,” she said.

At this special International Human Rights Day event, ECLAC’s highest authority remembered Honduran activist Berta Cáceres, a tireless defender of the Lenca people who was murdered in 2016. “The Escazú Agreement is the reflection of a hopeful gateway to the future. It is the first environmental accord negotiated by Latin American and Caribbean people. It is an agreement negotiated by us, for us, and it has been forged with our future generations in mind,” she emphasized.

“With this Agreement we are fighting against the culture of privilege, the culture of those who possess the information, who monopolize justice, those who are unwilling for there to be true participation or prior informed consent. We are democratizing the right to information, participation and justice. The Escazú Agreement is an essential instrument to avoid mortgaging the future, and to address the legitimate demands of many communities,” Bárcena added.

ECLAC’s Executive Secretary said that the Agreement is a message that our region is sending out, saying that the future matters, that future generations count and that we don’t want anything to be done about us, without us.

Furthermore, she insisted that the COVID-19 pandemic should not lead to neglect of the environment or human rights. “Therefore, we must seriously face the fact that there will be no development or economic recovery if we do not consider sustainability,” she said. She also explained that the Escazú Agreement is a cooperation agreement. While it is a treaty between states, it is above all a compact between each State and its societies, and its companies, since it enables a dialogue instead of two or three monologues.

“Society has expressed itself loud and clear: we want a different future, a future that does not take us back to where we were before. We want growth to support equality and equality to support growth, and we want to do this with environmental sustainability and our societies’ participation,” Alicia Bárcena concluded.

High-level event on the occasion of International Human Rights Day 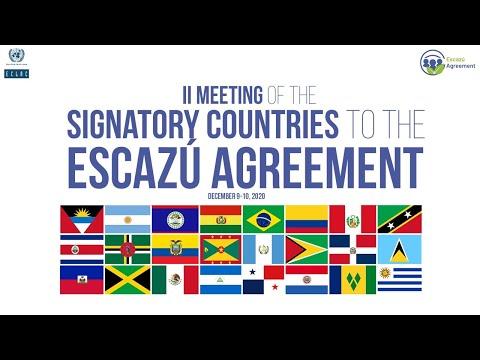