Home » Press centre » Signatory Countries to the Escazú Agreement Call for Working Together to Defend Fundamental Rights and Foster Sustainable Development in the Region
Available in: EnglishEspañol

The second meeting of the signatory countries to Latin America and the Caribbean’s first environmental treaty is being held virtually on December 9-10, under the auspices of the Government of Antigua and Barbuda.
9 December 2020 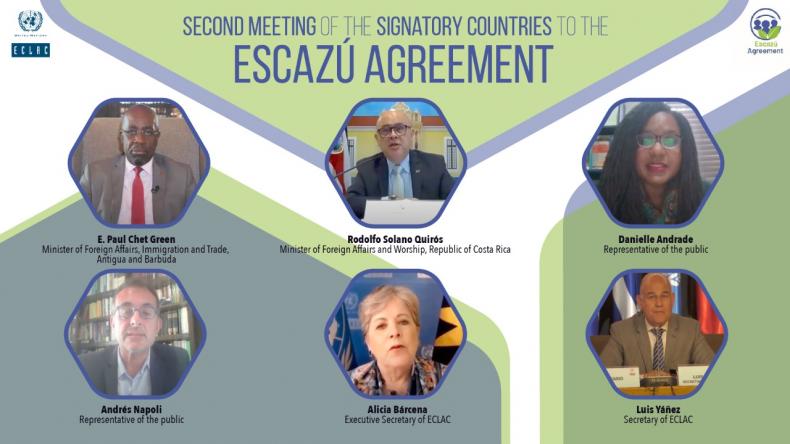 Opening session of the second (virtual) meeting of the signatory countries of the Escazú Agreement.

Representatives of the signatory countries to the Regional Agreement on Access to Information, Public Participation and Justice in Environmental Matters in Latin America and the Caribbean – known as the Escazú Agreement – began their second work meeting with a call to work together, strengthening multilateralism and cooperation to defend people’s fundamental access rights and to foster sustainable development in the region, in line with the goals of the United Nations’ 2030 Agenda.

At the Second Meeting of the Signatory Countries to the Escazú Agreement, which is being held virtually this December 9-10 under the auspices of the Government of Antigua and Barbuda, the representatives of the 24 Latin American and Caribbean nations that have already signed the treaty will continue analyzing the topics to be addressed at the first meeting of the Conference of the Parties, along with strategies and partnerships for the Agreement’s prompt entry into force and implementation.

The gathering was inaugurated by Hon. E.P. Chet Greene, Minister of Foreign Affairs, Immigration and Trade of Antigua and Barbuda; Rodolfo Solano, Minister of Foreign Affairs and Worship of the Republic of Costa Rica; Danielle Andrade, a lawyer and the elected representative of the public (from Jamaica); Andrés Nápoli, Executive Director of the Environment and Natural Resources Foundation (FARN) and alternate representative of the public (from Argentina); and Alicia Bárcena, Executive Secretary of the Economic Commission for Latin America and the Caribbean (ECLAC), the United Nations regional commission in charge of the Agreement’s Technical Secretariat.

In his welcome remarks, Minister E.P. Chet Greene indicated that the current health situation stemming from the COVID-19 pandemic has severely affected our peoples and economies, further exposing the fragility of our societies. In the case of the Caribbean, he noted that in addition to the pandemic, it also faces the climate crisis and difficulties on the economic front, characterized by high indebtedness and narrow fiscal space – all of which has caused severe strain along the path to sustainable development.

“In these troubled times, we must try to adopt transformative pathways and focus on a sustainable, inclusive recovery grounded in multilateralism, partnership, cooperation and regional integration. The Escazú Agreement precisely brings all of these elements into focus. As the first environmental treaty of our region, it puts people, equality and sustainability at the core, while offering a framework to build our capacities and work collaboratively for a common purpose, which is our environment,” he stated.

The Minister of Foreign Affairs and Worship of the Republic of Costa Rica, Rodolfo Solano Quirós, who spoke in his capacity as Chair of the Presiding Officers of the Agreement, recalled that today – December 9 – commemorates International Human Rights Defenders Day and that tomorrow – December 10 – marks International Human Rights Day. “We are here because we care about human rights, it’s that simple. Because we know that defending human rights is defending our essence, it is fighting for our dignity and for the basics of our existence,” he emphasized.

He added that the Escazú Agreement is one of the most novel tools existing in Latin America and the Caribbean to procure our citizens’ well-being, to build back better on the basis of sustainable socioeconomic models, and to create optimal conditions enabling our societies to further develop solidarity, awareness and ethics. “As the United Nations Secretary-General, António Guterres, put it, the Escazú Agreement is ‘a valuable tool to seek people-centered solutions grounded in nature,’” Solano said.

Danielle Andrade, the elected representative of the public, indicated that the Escazú Agreement goes to the heart of the struggle, giving the people the tools to address the issues that affect their health and environment since the treaty includes provisions for guaranteeing the rights of the public.

“Now more than ever it is important for countries to commit to the standards in Escazú. The COVID-19 pandemic has raised new concerns about decision-making around the environment,” she sustained. “In addition, it is important to address the requirements for States to implement special measures in favor of vulnerable people and environmental human rights defenders, so that they can exercise their access rights freely and without barriers, threats, attacks or intimidation.”

Meanwhile, Andrés Nápoli stressed that the Escazú Agreement is not about the regulation of natural resources or any country’s territory, but instead it seeks to lay the foundations for an environmental democracy and a sustainable and inclusive development model in Latin America and the Caribbean.

“We are making a call for all the signatory countries to redouble their efforts aimed at achieving the ratification needed to ensure broad participation by countries from throughout the region. We need many countries to become parties to the Escazú Agreement so that the people of our region can have more and better rights and, through them, can improve their lives,” he emphasized.

Finally, ECLAC’s Executive Secretary, Alicia Bárcena, underscored that the pandemic has revealed the high levels of inequality in existence and that human welfare is intrinsically linked to the protection of natural heritage. She added that, as United Nations Secretary-General António Guterres indicated, we must make peace with nature, a task that will define the 21st century.

“At ECLAC, we think that sustainable development is effectively possible and that building back with equality and sustainability is the path for the region. To achieve this, an ambitious policy agenda is needed that, at a time of such uncertainty, is not possible without broad compacts. State compacts that involve communities, businesses, women and young people,” the senior UN official indicated.

ECLAC’s highest authority stressed that building a welfare regime requires deepening democracy, full respect for human rights and the participation of all in sociopolitical compacts in favor of sustainability. “The Escazú Agreement is a regional success that motivates us along this path since it constitutes the region’s first environmental treaty, and the process for signatures and ratifications has continued advancing despite the pandemic: I congratulate the 24 signatory countries, the 10 countries that have deposited the instrument of ratification, and all those who are completing their national processes,” she stated.

In addition, she explained that the Agreement demonstrates the virtues of transparent, participatory and collaborative work, both on the negotiations as well as on the content of the treaty, along with the benefits of joint work by multiple social actors. And it addresses fundamental rights and emphasizes the democratic principles that are indispensable to achieving sustainable development.

“Over these intense days that await us, I invite you to give special consideration to the true beneficiaries of the Agreement: young people, women and men, indigenous peoples and Afro-descendent populations from across our region, who seek a better future each and every day. We must not forget that this instrument is conceived for them and particularly the most vulnerable persons and groups, in the spirit of leaving no one behind,” Alicia Bárcena sustained.

The Second Meeting of the Signatory Countries to the Escazú Agreement will continue this Wednesday, December 9, with special sessions addressing the national actions taken by the signatory countries, as well as cooperation for implementation of the Agreement. A high-level event will also be held on the occasion of International Human Rights Defenders Day.

LIVE BROADCAST Full programme of the meeting Message by Hon. E.P. Chet Greene, Minister of Foreign Affairs, Immigration and Trade of Antigua and Barbuda (video on YouTube) Message by Alicia Bárcena, ECLAC’s Executive Secretary (video on YouTube, in Spanish) Second Meeting of the Signatory Countries to the Escazú Agreement (website) 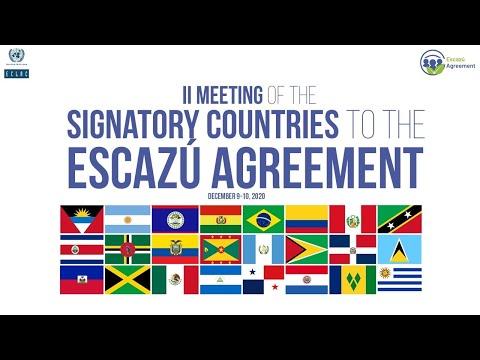